She was born in Hiroshima prefecture and graduated Hiroshima university majoring oil paint. After graduating university, she went to Tokyo. While she worked as an actress, she made an entry to La Biennale di Venezia 2005 AU Exhibition.

She produced many different kinds of art works depending on the usage, including an art work she did for Naruyoshi Kikuchi's concert flyers. She has always loved Japanese animations and movies, which motivated her to go to Hiroshima University to lean about creative field.

After graduating the University, she opened her own exhibition and she recorded high sales on her art works that determined her to work on art as her profession. She made and an entry to La Biennale di Venezia AU Exhibition in 2005.﻿

She was strongly touched by the wall paint "The Last Supper" by Leonard Da Vinchi and felt the beauty of the place that gave opportunities for people to gather in one where they actually had to go to the place to see an art work in the old times. She was also moved by the atmosphere of the wall paint that she felt the "existence" of the artist who drew it. ﻿ 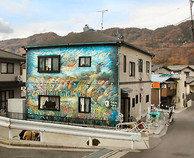 She has also created a huge wall paint of 16 meters on the wall of a bridge and won a Design Art Sign Award in the project of Revitalizing the City of Hiroshima in 2008. After the year of 2006, her activity expanded to performing live painting. She painted in front of the audiences at an event or a club and showed the process of completing an art work from a plain canvas. Her performances has been recognized highly around the world including Cambodia, and Germany. She also set out to a production of an animation.﻿﻿ 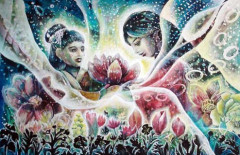 Her animated work of "Suipas Zuirapusa" in 2009 was nominated for the NHK Digital Stadium's best selection. In the same year of 2009, she won a first place for the World Table Tennis Commercial Contest with her work of " Tatsuko's Holiday". Soon after, she had an offer to create a commercial for NHK period drama called "The Legend of Ryoma" in 2010.

Furthermore, she affiliated with an entertainment company as an actress and played a part in NHK's TV drama call "Sawayaka Sannin-gumi" for a year. She is a talented artist who challenges to defy the boundary of a painter and a shapeless world of art to create and develop a new technique and who disseminate her accomplishment to the world.﻿﻿